Established in 1932 as a Christian, co-educational school, we are proud to have been entrusted with delivering a first class education for generations of pupils.  We are a  forward-thinking, diverse and inclusive community; our approach is to enable children to learn with enthusiasm and flair.  We want to ensure that each child's curiosity and love of learning is harnessed, nurtured and developed, so that they are inspired and prepared for their life-long journey of discovery.  We promote politeness, hard work, curiosity, creativity and independence.  We want every child to do their very best and we are dedicated to ensuring all are given the necessary support and challenge.  Our school crest reminds us that we are here to ignite a passion for learning and  to  ‘let each flame burn brighter.’ 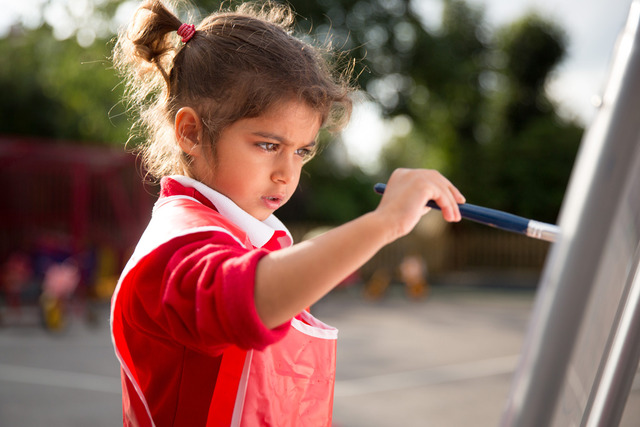 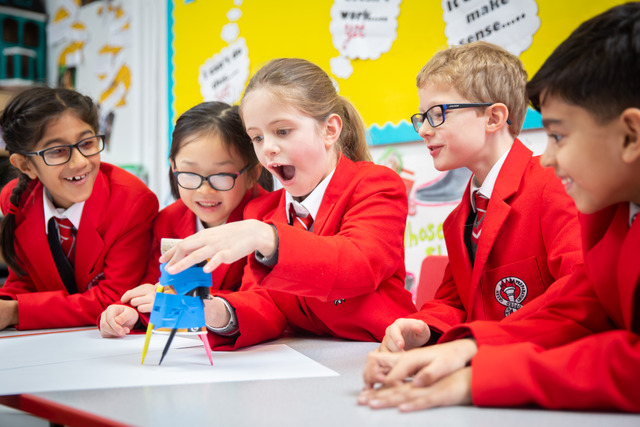 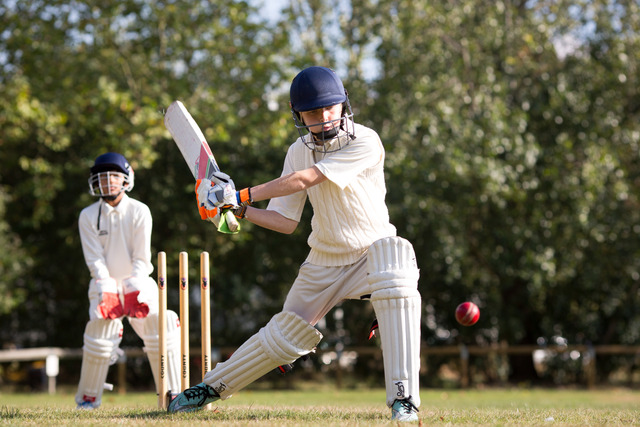 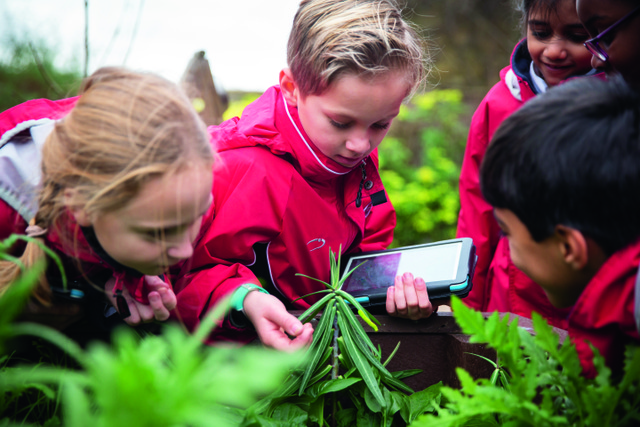 11th June 2019 — Woodford Green Prep School was delighted to welcome Rob Eastaway, author of bestselling books on mathematical and logical problem-solving including “Why Do Buses Come in Threes?” and “Maths for Mums and Dads”. He is Director of Maths Inspiration, winner of the 2017 Zeeman Award and regularly speaks on Radio 4.

He started the day with a problem, inviting pupils to solve the CHOC ICE challenge. I doubt these students will ever eat a choc ice again without seeing the hidden symmetry in the word. Can you see it?

The pupils were quick to see beyond the apparent magic behind being able to predict numbers on dice, chosen by a volunteer. They quickly grasped that the solution was based on an understanding that the opposite sides of a dice add up to seven.

Throughout the afternoon pupils were engaged, challenged and thoroughly determined to figure out the mathematical solutions to the problems being presented. Many pupils then took these challenges home to test on their parents and siblings. A few parents have been left scratching their heads for a solution!

The sessions were interactive and designed to inspire and develop mathematical higher-order thinking skills, that are applicable both in and beyond the classroom. The day was finished with a introduction to binary code through a very simple card and numbers game. Thank you to Rob for introducing a different side to maths, and genuinely convincing the entire audience that maths is fun and surprising!

19th November 2018 — Rewind the clock to 1941, a crisp autumn morning with the leaves falling in Woodford Green, children waiting in the playground for the bell to sound, the signal that school is about to start.

Fast Forward to 2018 and pupils at Woodford Green Prep School are still following a similar routine, albeit without the shadow of war looming. Today they welcomed two very special alumni when Shirley Harrison a former journalist and published author of the internationally best selling The Diary of Jack the Ripper and Maureen Hoskins, former Mayor of Redbridge returned after 77 years.

It was a special journey down memory lane. Although much of the school has been modernised beyond recognition, both ladies were transported back to their school days and some wonderful memories were shared. Maureen even managed to identify herself in a photograph hanging in the School gallery.

The visit included tea in the Headmaster’s office, a tour of the grounds and a meeting with School Council. No School visit would be complete without a school dinner, although both ladies enjoyed the lemon sponge they declined the custard, some school experiences are best not revisited.

The School Council were intrigued to hear what the school was like in the 1940s. The children were surprised to learn that one of Shirley’s favourite lessons was listening to the radio programme “How Things Began”. Another question asked was, “what was it like being at WGPS during the war?” The ladies said they found the experience interesting rather than frightening, although they were sure their parents didn’t share this feeling. “We used to pick up sharpnel on the way to School and compare who had found the largest piece”. On one occasion an air raid siren sounded on the walk to School, “We did as we were told and headed for the nearest bunker, once the bombing stopped we discovered the Church that formerly stood next to the School had been hit and destroyed.”

Shirley recalled she was a Trojan (the name given to one of the school houses which is still in use today). This was met with cheers from the Trojan’s on the School Council, and disappointment from the Greeks and Romans. Some rivalries never cease.

Woodford Green Preparatory recently launched its alumni, Jonathan Wadge, Headmaster, stated “It's been so interesting to uncover the history and memories of life at WGPS through the alumni who have joined. We were delighted to be contact by Shirley and Maureen and couldn’t miss this opportunity to invite them back and hear first hand about WGPS in the 1940s. It is an inspiration for the children to meet two alumni who have gone on to be so successful”.

The children had the opportunity to see Maureen’s Mayor badge close up and Shirley kindly donated signed copies of her books to the School library.

Both ladies are truly inspirational and we are very proud they are part of the WGPS story. The School has clearly played an important part in their formative years, when asked about forgotten memories, Shirley responded “Memories from long ago are much more vivid, you can easily forget a shopping list, but you never forget your childhood”.

29th October 2018 — When teaching History at Woodford Green Preparatory our aim is to make the connections from a child’s individual knowledge and experience with the events and lives of others in the past.  The field of History is not just about ploughing through endless written texts.  It is about seeking evidence, making interpretations and forming questions from a plethora of resources, such as artefacts, artworks, architecture, music, poetry and maps.  One of the most insightful resources being the narrative of family, neighbours and friends.

Interpreting what is being communicated supports the development of critical thought, a skill so essential in the information overloaded wider society that pupils of today are presented with.  Is ‘fake news’ only a modern phenomenon?  History is so much more than an endless list of significant dates to be memorised.  A task that is so arduous when there is little understanding of the context.

Woodford Green Preparatory School created an art installation around Remembrance 2018, using the poppy as the central theme and our recycled old style uniform as the main medium.   The subject of war is never easy to discuss.  However, through the design and generation of meaningful art, an opportunity is presented to facilitate thought on the challenging themes of sacrifice, heroism, obedience and loss.  Discussions motivated some pupils to produce independent writing for the British Legion’s Thank You campaign.  Year 6 produced an evocative canvas around their study of the poem In Flanders Field.

The Remembrance project is on display in School and can be viewed at our Open Afternoon Talk and Tour, Friday 9th November 2018, see our website for further details www.wgprep.co.uk

A Royal Talent for Art!

A Royal Talent for Art!

Woodford Green Prep School is delighted to announce that Erin Ruggles (age 5) design for the Radio Times Royal Wedding poster competition was included in a shortlist of 20 published in this week’s edition of the Radio Times.

23rd May 2018 — Woodford Green Prep School is delighted to announce that Erin Ruggles (age 5) design for the Radio Times Royal Wedding poster competition was included in a shortlist of 20 published in this week’s edition of the Radio Times.

Erin was one of 8000 young children who submitted entries to the competition.  Class teacher Mrs Kaner launched it as a school competition just before Easter with several entries submitted by WGPS pupils.  These were then sent away to the Radio Times to be judged by authors Lauren Child and David Walliams who had to select their favourites.  Erin received a signed copy of Lauren Child’s book ‘Clarice Bean Utterly Me’ which was presented to her in assembly.  We are delighted to announce Erin’s success and look forward to seeing her artistic flair develop.

15th May 2017 — Woodford Green Prep extend their warmest congratulations to Year 4 pupil Zana Robertson and her gymnastic partner Ashley Appiagyei, who won a silver medal at the National Acrobatic Gymnastic Finals, held in Stoke on Trent.

Following on from their gold medal success at the regional qualifying championships, they earned a place at the finals representing the Eastern Counties and competing against all the gold medalists from the UK regional qualifiers.

Zana and her partner scored 26.25 out of a potential 30 marks and were only 0.05 points behind the gold medal winners, quite a remarkable achievement considering Zana only joined the Jaybee gymnastic squad in January 2017.  Zana's composure under pressure was particularly impressive, as the duo were performing before of a panel of eleven judges, hundreds of spectators, family and fellow team mates.

We are extremely proud of Zana and look forward to celebrating her success, commitment and hard work in assembly.

Woodford Green Preparatory School rises to the challenge of going red for Red Nose Day with style, music and humor.

31st March 2017 — As one of the UK’s biggest fundraising events, Red Nose Day brings the entire nation together to ‘do something funny for money’. Woodford Green Preparatory School decided to get involved again this year and help raise money for this cause.

Comic Relief is always very well supported at WGPS and a brilliant reason to put on a concert. All the school’s instrumental ensembles and choirs had been rehearsing during the term preparing pieces to make the audience laugh and think.

Before the concert a Year 6 student stated, "The Choir has been learning songs for the Red Nose Day Concert. I love the songs, my favourite is 'Bonkers' because we sing in harmony doing silly verses. I think this will be a great success because it is for charity. I also think this might be our best concert yet! This will be a great Year 6 memory for me".

On Friday 24th, everyone was asked to come to school in non-uniform and wearing something red. For the children’s entertainment, there was a very special, surprise assembly - a staff fashion show. The contestants pulled out all the stops in some hilarious, eye-catching designs and dance moves on the catwalk.

It was a fantastic event and the children thoroughly enjoyed it. We are proud to have raised a total of £568.30.