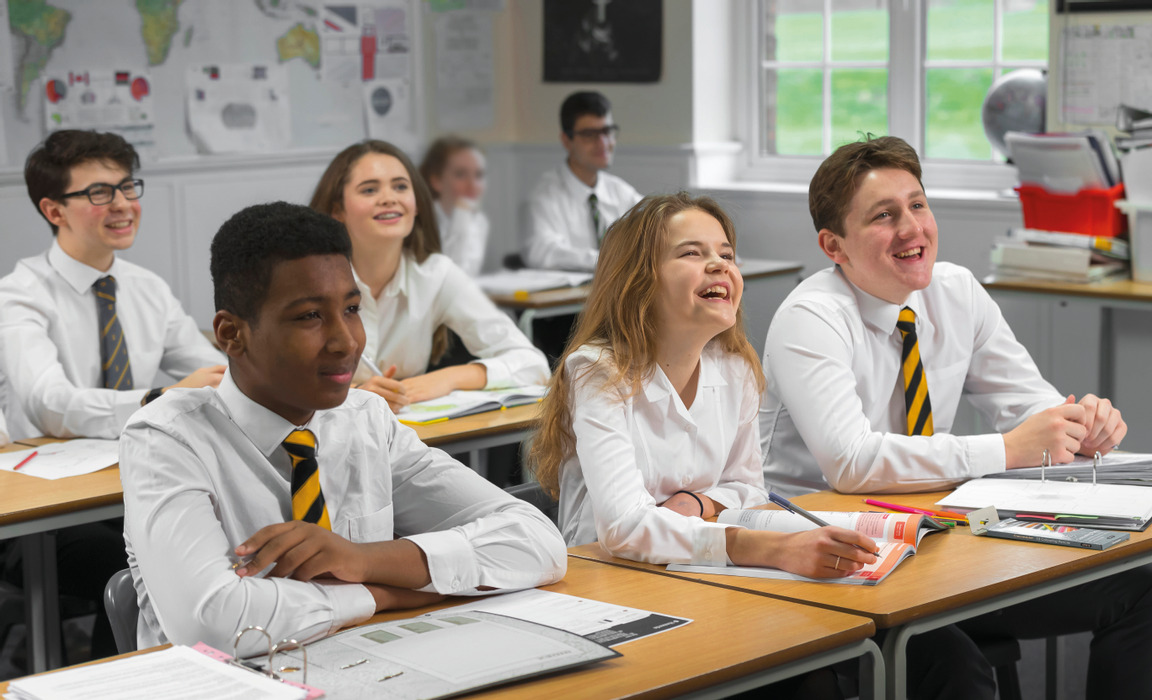 The Oratory is an HMC Co-educational Catholic Boarding and Day School for pupils aged 11-18. An Oratory education gives our young people every opportunity to draw out and find their individual innate gifts and qualities, and instils in them a sense of joy and a genuine love of learning. At The Oratory everyone will find their place to excel.

We are really proud of our broad and rich curriculum and strong exam results; however, an Oratory education is about developing our young people in a much wider sense than exam results alone can demonstrate. There is 'something deeper' in an Oratory education - hard to define but undeniable - by virtue of its unique ethos and history as the only school founded by arguably the greatest educational thinker of the Victorian age, Saint John Henry Newman.

The Oratory was placed in the top 3% of schools nationally for value-added at A Level in 2018 and again in 2020. This means that pupils leave The Oratory with higher grades than the national average for their ability. The breadth of the subjects on offer, combined with subject-based enrichment, promotes strong academic development.

As a Catholic school that welcomes pupils of all faiths or none, visitors often comment on the inclusive family atmosphere of our school, and it is this supportive environment and our strong 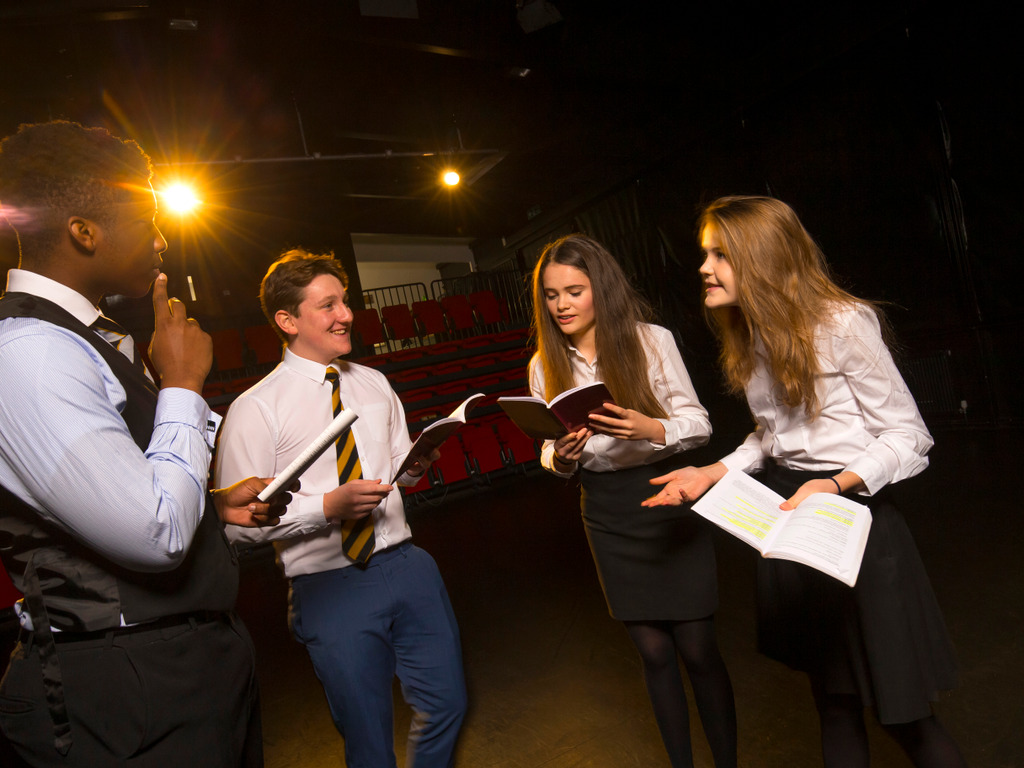 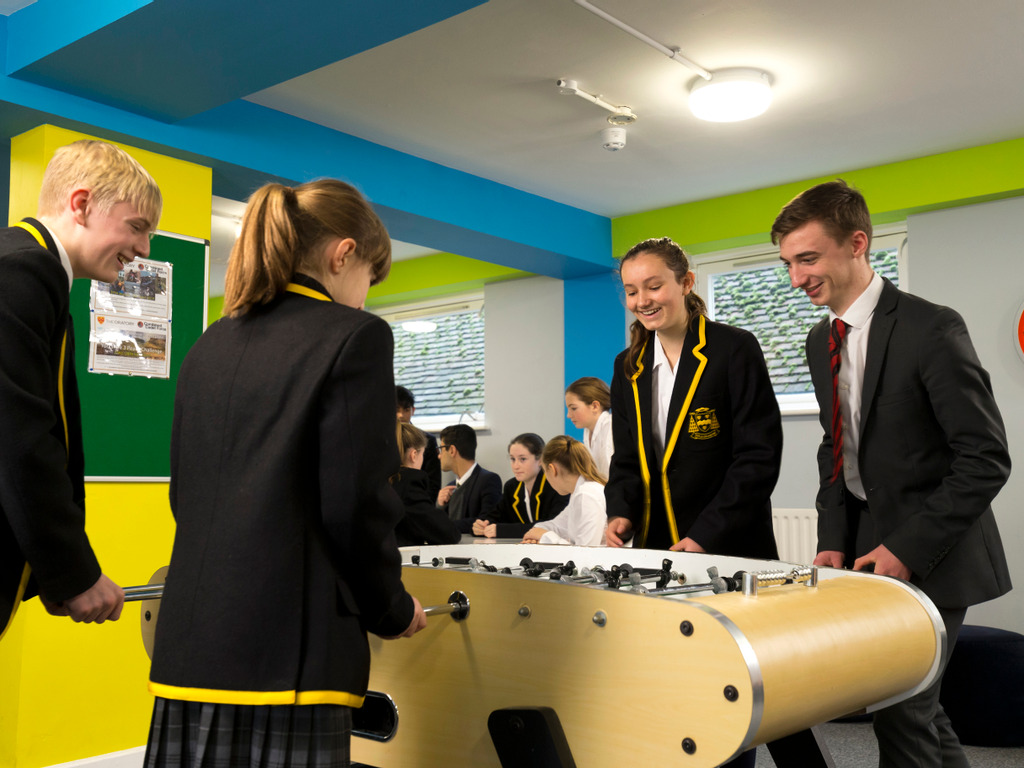 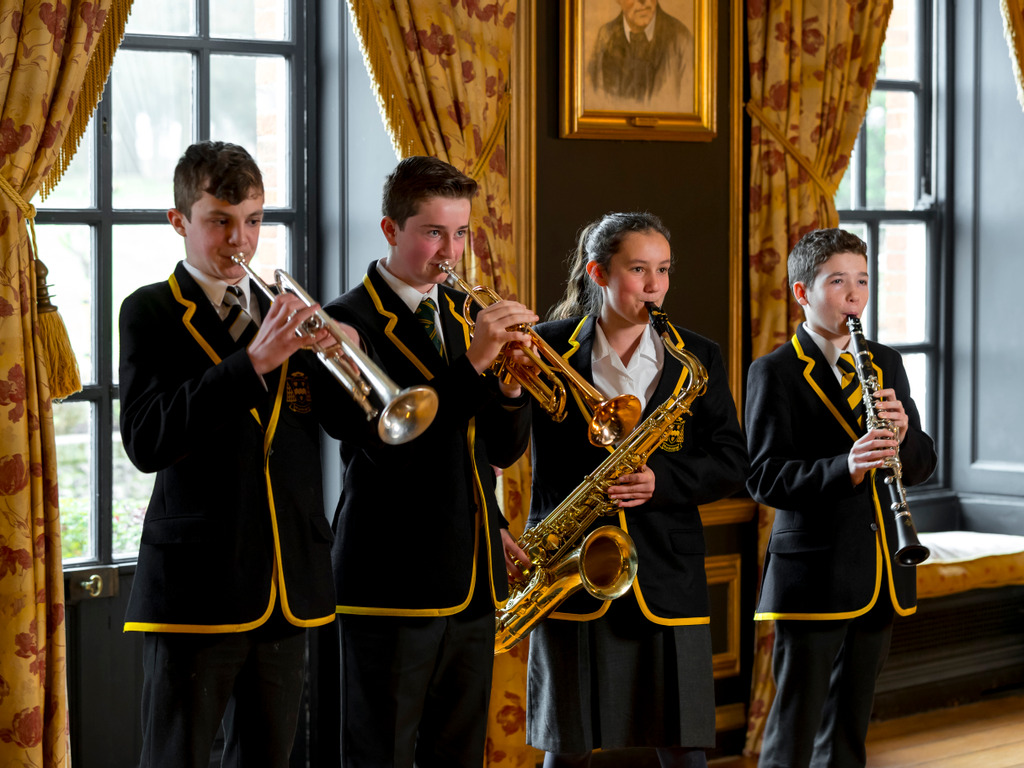 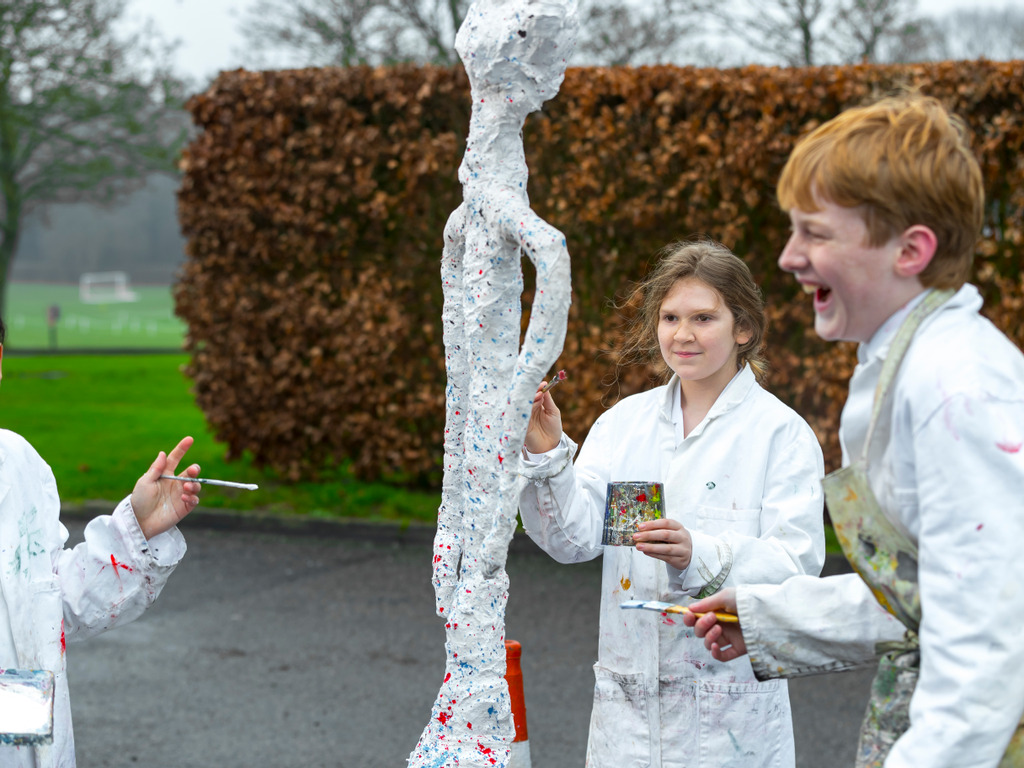 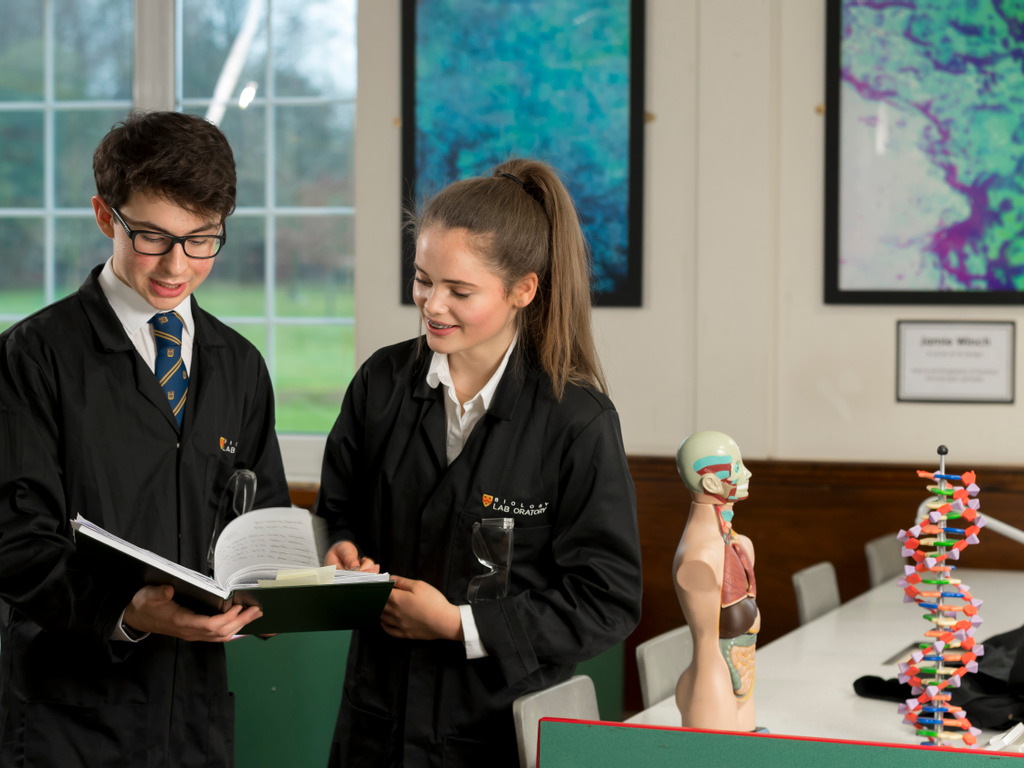 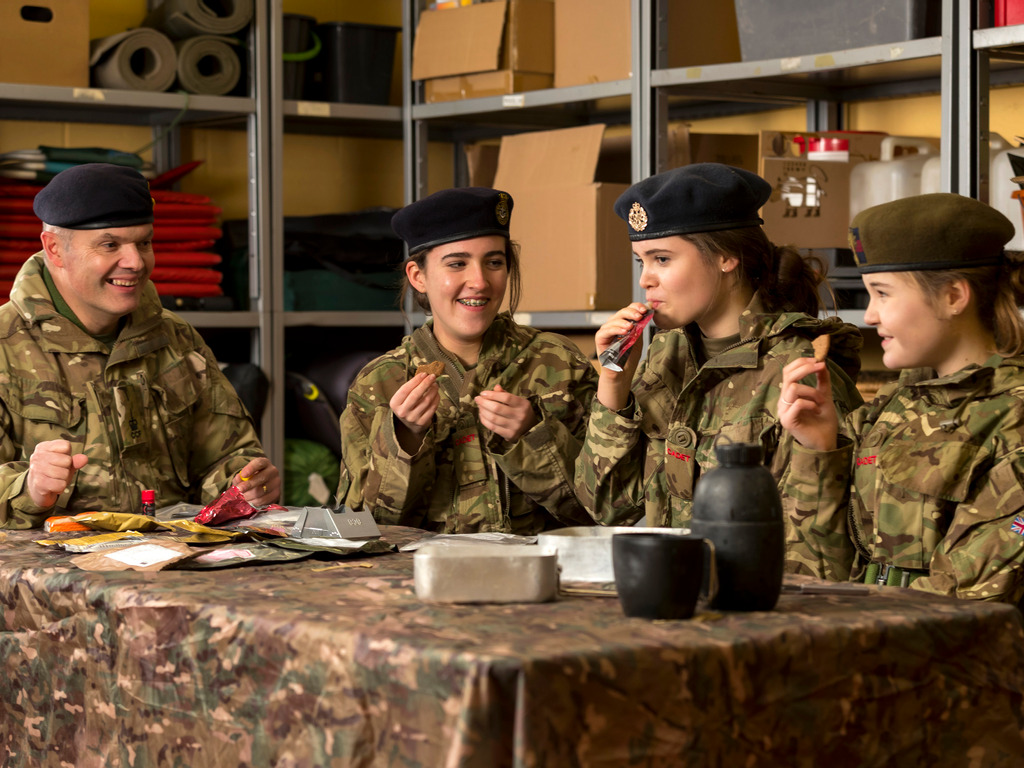 The Oratory Open Morning will take place on Saturday 26 February, where you will be able to explore our facilities in their beautiful surroundings and meet our staff and pupils in person.
Find out more

We have a range of military subsidies, sibling discounts, completely confidential bursary options and, of course, a range of scholarships that are awarded at the main entry ages of 11+, 13+ and 16+.

Scholarships are awarded at the discretion of the Head Master to recognise excellence, ability, and potential in one or more academic or co-curricular areas. These awards not only carry with them a financial reward but also bestow an enormous amount of prestige and sense of achievement on the pupils selected.

*All day fees include tuition and lunch, any additional meals will be charged at £3.10 per meal.

The Oratory School is Rated 'Excellent' in ISI Inspection 2021

The Oratory School is Rated 'Excellent' in ISI Inspection 2021

The Oratory has received the highest grade of Excellent for both Independent Schools Inspectorate (ISI) categories - pupils’ academic and other achievements and pupils’ personal development.

15th December 2021 — The Oratory has received the highest grade of Excellent for both Independent Schools Inspectorate (ISI) categories - pupils’ academic and other achievements and pupils’ personal development.

The Oratory’s full ISI Report is available to read here.

The Independent Schools Inspectorate took place between 2 – 5 November 2021. The report describes Oratory pupils as showing ‘high levels of self-understanding for their age. They show self-confidence in many areas of school life, are resilient and adapt well to new situations’ - attributes particularly important to these unprecedented times. Oratory pupils ‘respect’ yet ‘are not afraid to challenge the beliefs and cultural attitudes of others… unkindness or misbehaviour.’ They were also praised for having ‘an excellent understanding of the importance of making good decisions’ as well as for ‘showing ambition and a clear understanding of how to get the best from their lessons.’

The ISI described leadership of The Oratory as encouraging of ‘both inclusivity and excellence’ and acknowledged the school’s initiatives to raise academic attainment, declaring A Level results as ‘excellent’ and describing teaching as ‘consistently well planned’ with ‘additional support available outside lesson time.’ It also commented on the ‘strong relationships’ by pupils with their peer group as well as teaching and boarding staff – with the school motto, Heart Speaks to Heart, ‘enacted daily.’

Joe Smith, Head Master says “The results are an absolutely wonderful reflection on Oratory pupils and the staff who work so hard to support and guide them. Inspections are all about pupil outcomes - what the school does being considered “contributory factors” in those outcomes - and throughout the inspection, inspectors were extremely complimentary about our pupils in all sorts of different ways. It was really quite moving and a privilege to hear what they said about them. This independent and rigorous judgement is a wonderful endorsement that we are firmly on the right path.”

The Oratory’s full ISI Report is available to read here.

14th December 2021 — The Oratory is delighted to announce that L6th Form pupil Ollie Rae has been selected for the National Youth Training Choir (NYC).

Ollie Rae says “I feel very honoured to have been selected for the NYC. Oratory Music has really helped me with my singing progress and I am excited for what the future holds.”

Stephen Burrows, Director of Music says “We are so proud of Ollie and he is very deserving of his place with this choir. This will be a wonderful group for him to be part of and will add to his already very broad experience to date. We are rightly proud of Ollie; we have been fortunate to see his development into the fine young singer he is today, singing everything from Cantatas to Coldplay!”

E. Gwilliam, Z. Hemans-Shekiluwa, J. Martin and A. Donnai-Jessop competed in the individual events with each boy making it through the heats into the knock-out stages.

E. Gwilliam, Z. Hemans-Shekiluwa, J. Martin and A. Donnai-Jessop competed in the individual events with each boy making it through the heats into the knock-out stages, with all bar E. Gwilliam making the semi-finals.

J. Martin earned a Bronze medal but was defeated in the semi-finals. A. Donnai-Jessop was runner-up and Silver medallist in the U15 competition and Z. Hemans-Shekiluwa won Gold in the U13 event.

Marcus Fec, Assistant Head Co-Curricular says “This was a fantastic performance from our pupils after just a term of Fencing coaching. In a competition involving nearly 40 schools to come away with a Gold, a Silver and a Bronze was an amazing feat. We look forward to competing in the Team championships next term.”

Oratory Fencing training takes place every Wednesday evening. Following on from their success, there are now plans to enter the Team Championships next term and additional national and local competitions. All coaching is provided by Inspion, a collective of competitive fencers who have represented the country in international competitions.

The Oratory’s 1st XI hockey team are delighted to have won the U18 Berkshire Girls’ Hockey League in their first competitive season.

13th December 2021 — The Oratory’s 1st XI hockey team are delighted to have won the U18 Berkshire Girls’ Hockey League in their first competitive season.

Victoria Watson, Head of Hockey, says “If I were to go back 12 weeks ago to our first hockey session, the team and I could not have dreamt of what they have achieved. From players one to eighteen they have not once dropped their heads and have played with true Oratory spirit.”

The Oratory has a proud tradition of sporting excellence. Major girls’ sports are hockey and swimming in Autumn Term, netball or rowing in Lent Term and tennis, athletics or rowing in Summer Term. Girls also have the opportunity to play football, touch rugby and cricket, as well as squash, badminton and real tennis.

Sports Scholarships are available at 11+, 13+ and 16+ entry and are awarded to recognise excellence, ability, and potential. Please contact Natasha Pearce, Registrar at registrar@oratory.co.uk for more details.

The Real Tennis British Open is the sport’s most prestigious competition, last played in 2019 due to the Covid pandemic.

Nick Howell said: “I’ve had 18 or 19 months without competitive tennis. The British Open is normally the biggest major for us, and it’s amazing to be back.”

Howell, who is the first professional at Jeu de Paume de Bordeaux, and Fahey have enjoyed a successful and established doubles partnership over the years, winning the British Open Doubles in 2018 and competing in the World Doubles Championship in 2019.

Fahey holds the title of World Champion in Real Tennis, undefeated between 1994 and 2014. He lost the World Championship in 2016 to Camden Riviere, but won it back at the next challenge in 2018, two days before his 50th birthday. He holds the title to this day and has now surpassed Pierre Etchebaster’s record reign of days as World Champion. A very special achievement.

Rob Fahey's wife, Claire Fahey, is Head of Racquets at The Oratory School and also competed in this year's British Opens. Claire says "For myself, it was my 4th British Open and I was the only female competing in the event. Since 2014 I have been able to compete in the Open alongside the men, on the merit of standard. I lost my first-round singles in 4 sets. We won our qualifying doubles match and but lost to the number 5 seeds in 4 sets." Congratulations, Claire.

Real Tennis is a cross between tennis and squash. It is played around the world, with only 30 courts in the UK, one of them right here at The Oratory School in Woodcote. If you are looking for a new hobby, fancy a different challenge or just want to get on court with a World Champion then please get in touch. Email: pros@ortc.uk.

The Oratory was delighted to partner with Shinfield View Care Home, part of the Berkeley Care Group, on a new community project this week.

21st November 2021 — The Oratory was delighted to partner with Shinfield View Care Home, part of the Berkeley Care Group, on a new community project this week.

The project involved pupils at The Oratory School and residents of Shinfield View Care Home working together to plant 10 beech trees in The Oratory school grounds as part of The Woodland Trust's The Queen’s Green Canopy.

The Queen’s Green Canopy (QGC) is a tree planting initiative created to mark Her Majesty’s Platinum Jubilee in 2022. Everyone across the UK is being invited to plant trees from October 2021, when the tree planting season begins, through to the end of the Jubilee year in 2022.

The Queen’s Green Canopy will create a network of individual trees, avenues, copses and whole woodlands in honour of The Queen's service and the legacy she has built. This will then create a green legacy of its own, with every tree planted bringing benefits for people, wildlife and climate, now and for the future.

Laura McSolely, Events & Activities Manager at Shinfield View Care Home, organised the community project and had a target to plant 100 trees. When Laura got in touch with The Oratory, we were delighted to become involved. Laura says "Shinfield View had a great day on Friday with the pupils and staff at The Oratory School. Everyone worked so well together to get the job done and the pupils were especially kind to our Dementia resident Neil who helped plant the trees as well."

Andy Burnham, Head of Grounds, says "As part of the school’s woodland management we actively replenish the trees on site, so it was wonderful to combine this with celebrating the Queen’s Platinum Jubilee".

Find out more about The Queen’s Green Canopy (QGC): https://www.woodlandtrust.org.uk/plant-trees/schools-and-communities/queens-green-canopy/

Choosing a school is one of the most important decisions that you make for your child and our Registrar who would be delighted to hear from you if you are considering The Oratory. Of course, coming to see the school and meeting the pupils and staff is by far the best way of knowing whether The Oratory will be the right place for your child, and we would be very happy to arrange a visit. Find out more about our Admissions process here.

The Oratory Open Morning will take place on Saturday 26 February, where you will be able to explore our facilities in their beautiful surroundings and meet our staff and pupils in person.
Find out more