At St Ives we fully understand how children excel and thrive in the nurturing, encouraging atmosphere of this well-established school. St Ives provides small class sizes and outstanding pastoral care, indivduaility is cherished and celebrated. Our dedicated and perceptive teaching team ensure that children are appropriately challenged and progress at a pace right for them.

Our varied curriculum allows plenty of opportunity to discover and develop each child's ability and talents in Sport, Art, Music, Drama, Languages and Technology as well as reaching her full academic potential.  We are priveleged to have wonderful grounds and offer Forest School as part of our curriculum.

As a preparatory school we prepare children for their senior school education.  We get to know them extremely well and are able to develop a clear picture of which senior school will be best for your child.  We are proud of our outstanding record of guiding our pupils into their first choice entry of senior school and of the many scholarships awarded to St Ives children.

Choosing the right school for your child is an important task, but after a visit to our school you will soon discover why St Ives pupils are going places. 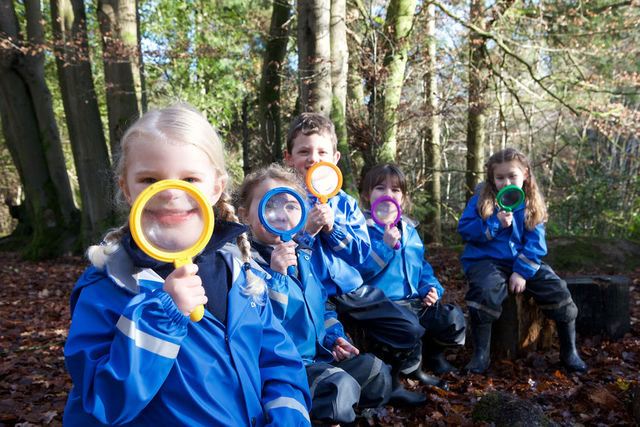 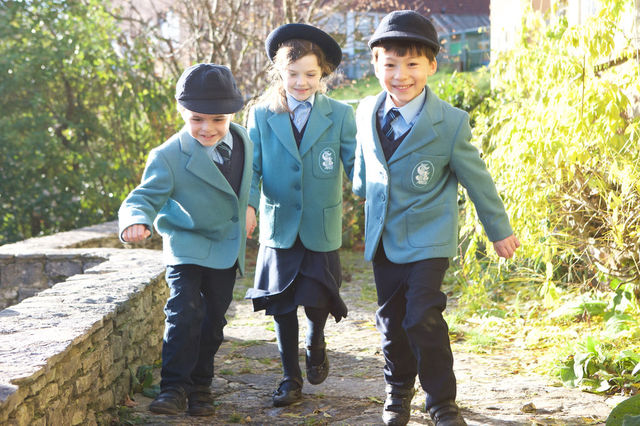 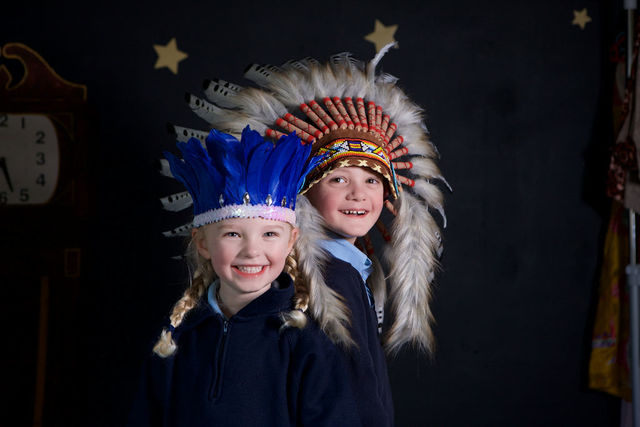 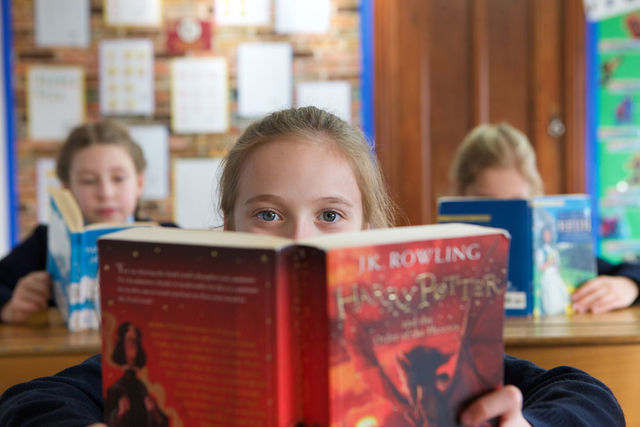 Year 6 pupils at St Ives School in Haslemere are celebrating incredible scholarship results this year. In a year group of 16 pupils, the children were awarded 15 scholarships to a wide variety of different senior schools.

11th March 2021 — Scholarships were gained in a range of disciplines, from Drama, Art, Sport and Tennis to Academics and also an all-rounder scholarship. The diversity of the scholarships proves the breadth and depth of the education that St Ives offers and the strength of character of its pupils.

Mrs Kay Goldsworthy, St Ives Head Teacher, said: “We are so proud of all our pupils who have done so well to gain places at their chosen senior schools and to have been awarded so many scholarships is phenomenal. This year has been particularly tough due to many exams taking place online, so I want to congratulate everyone for their resilience and versatility. These are remarkable qualities that will benefit the pupils as they go to their senior schools and beyond. Their schools will be very lucky to have them!”

This week, the children at St Ives School in Haslemere, Surrey took part in a World Book Day Challenge.

4th March 2021 — Whilst the children have been learning from home, due to Covid-19, St Ives’ Head Teacher, Mrs Goldsworthy, has been setting pupils weekly “Together Whilst Apart” Lockdown challenges that are purely for fun and allow time away from screens and desks. This week’s challenge was inspired by World Book Day with Mrs Goldsworthy challenging the pupils to create a well-known book character out of either a potato or a spoon.

Mrs Goldsworthy was thrilled with the entries she received. Characters ranged from Roald Dahl favourites such as Mr Twit from the Twits, the evil aunts, Aunt Sponge and Aunt Spiker, from James and the Giant Peach to the Giraffe from The Giraffe, The Pelly and Me to Roger Hargreaves characters such as Mr Bump. The entry that made her laugh the most was a potato dressed as Dav Pilkey’s Captain Underpants!

Mrs Goldsworthy said “Being creative has always formed an integral part of a St Ives education and it is wonderful to see how the children’s creativity has thrived during this period of remote learning. They have clearly had huge amounts of fun taking part in all the challenges and, by sharing them in our community, they’ve helped us stay ‘Together Whilst Apart’. However, we are all so excited that we’ll be back on the school premises on 8th March and can’t wait to enjoy the last few weeks of term together.

‘Together Whilst Apart’ was the school’s temporary motto, used whilst the school was closed, and formed a key role in all their planning – be it academic work, extra-curricular activities or pastoral care. The school knew it was fundamental to keep the spirit of St Ives at the forefront of their children’s minds so they continued to feel involved and connected, ready for the physical return to school.

St Ives School is a thriving independent prep school in Haslemere for children aged 2-11 years old. There are only a few remaining places for Reception September 2021. To find out more email registrar@stiveshaslemere.com or call 01428 643734.

St Ives Pupils Are Walking Their Way Through Lockdown

St Ives Pupils Are Walking Their Way Through Lockdown

The children at St Ives School in Haslemere, Surrey have kept active throughout the last six weeks by walking!

12th February 2021 — St Ives School turns 110 years old this year, so in order to ensure the children are keeping busy and active during Lockdown, St Ives Head of Sport, Mrs Woodward, has challenged the children to walk a minimum of 110 miles per week collectively. Children have been recording their mileage and sending them through to her on a weekly basis.

The challenge has really struck a cord with all the pupils. Children from Nursery to Year 6 have been heading outdoors week after week, in snow, hail and rain, and have been smashing the 110 mile target every week! After only 4 weeks of receiving the challenge, the children had already walked from Land’s End to John O Groats, the equivalent of walking 1,083 miles and had completed the UK Virtual End to End Challenge. This is an amazing achievement in a school of only 110 pupils. However, the children didn’t stop there and by the time the school broke up for half-term, the children had walked a total of 1,554 miles! The challenge also had some friendly intra-school competition such as ‘best class total’ and ‘greatest number of participants’ in a class, which were celebrated in our weekly ‘virtual’ celebration assemblies, as well as some individual mentions (not necessarily based on performance).

Kay Goldsworthy, Head Teacher of St Ives, said “It has been so uplifting to see the children take on the 110 mile challenge to celebrate our 110th birthday with such energy and vigour and we are delighted that they have collectively walked from Land’s End to John O’Groats and halfway back again! We know that the ‘live’ lessons we’re delivering online are the best way of continuing the children’s education, but we are fully aware they involve a certain amount of screen time. To counteract this screen time with lots of outdoor activity is exactly what we hoped for and sums up the culture we have at St Ives – we work hard but we play hard too!”

We are thrilled to announce that Camp Beaumont is coming to St Ives for the Easter and Summer holidays 2021.

4th February 2021 — Camp Beaumont is the most experienced day camp provider in the UK, providing safe and stimulating programmes for children to enjoy, enabling busy parents to enjoy hassle free and flexible child care options. Camp Beaumont has been operating across London and the Home Counties for over 40 years and we are delighted to be joining the other prestigious schools that partner with them.

The programmes at St Ives will be for children aged 3 to 11-year-olds and are designed to help children get active, challenge them mentally, build new life skills, discover new interests – and most importantly help them grow in confidence. And there’s enough to suit a wide range of interests, which we know our pupils will love.

For the adventurous explorer, activities like archery will give kids a real sense of excitement. For sporty competitors, a wide range of games from benchball to capture the flag will test their athletic abilities and get them moving. And for artists, actors and musicians in the making, Camp Beaumont also offers a number of opportunities to get creative, from jewellery making to clay work and even proving they’re the camp’s next big star in Beaumont’s Got Talent.

Camp Beaumont will be running at St Ives School from 6 – 16 April and 19 July – 27 August. For more information and to book a place, visit www.campbeaumont.co.uk

This week, the pupils at St Ives School in Haslemere gathered in their bubbles, donning Christmas headwear, to take part in a sponsored Elf Run.

18th December 2020 — The children were raising money for Phyllis Tuckwell Hospice Care which provides support and end of life care for patients and families who are living with an advanced or terminal illness in West Surrey and North East Hampshire.

St Ives is a Green Award Eco-School and its pupils are extremely environmentally aware, so pupils were delighted to help save the environment and the charity by bringing in any Christmas headwear they had at home. Those that didn’t have anything, would use the Elf hats! Children had a fantastic morning running around the school grounds in their bubbles, avoiding the rain! It was a perfect way to finish off the term.

Mrs Kay Goldsworthy, Head Teacher at St Ives, said: “What a fantastic way for the children to finish off the term. They have had a wonderful time running around the school grounds, knowing that they are raising money for a fantastic cause whilst also following one of our key environmental messages of ‘reduce, reuse, recycle’. Thank you so much to Ethan for coming up with this initiative and it was great to see such an array of Christmas head gear being worn. We are all feeling extremely Christmassy now!”

Charli Quay-Barnham, Community Fundraising Manager at Phyllis Tuckwell, said “We are really grateful to St Ives School for supporting Phyllis Tuckwell Hospice Care this Christmas and joining in with our sponsored Elf Run. When Ethan contacted us about his eco-idea to re-use elf hats, antlers and other Christmas headwear that the students already had from previous years, rather than use new hats they didn’t need, we were delighted to support this idea! Ethan’s passion as an eco monitor at St Ives was evident when he contacted Phyllis Tuckwell and his proactive approach to influencing the other children and teachers as part of the school’s sustainability is inspiring. Following Ethan’s success, Phyllis Tuckwell will look to suggest this idea to other schools for future Christmas’ Runs with the hope that many will follow suit.”

St Ives School became a Green Flag Eco-School in June 2020 and was a finalist in the Green Award at the Independent School of the Year Awards in September 2020. www.stiveshaslemere.com

St Ives School in Haslemere has been holding an Art Exhibition inspired by the Amazon Rainforest to raise funds that will be shared between the school and the World Wide Fund for Nature (WWF).

11th December 2020 — Every child, from Reception to Year 6, has produced a piece of art, based on their learning of life in the Amazon Rainforest. Many have painted Amazonian animals, whilst others have been inspired by South American landscapes or indigenous people. Every piece of art has been beautifully framed and is on display in the school hall. The school would normally invite parents and the local community into the school to see the work in person, but due to the Coronavirus pandemic, the school has held the exhibition virtually. Parents have been invited to buy their child/ren’s artwork, with raised funds being shared between the school and the WWF.

Kay Goldsworthy, Head Teacher at St Ives, said: “Our Autumn Art Exhibition plays an important part in our school calendar and we are thrilled to be combining it with teaching the children about the Amazon Rainforest and the environmental challenges it faces. The standard of work from the children is outstanding and it is clear to see they have been deeply moved and inspired by what they’ve learnt. As a Green Flag Eco-School, we are committed to ongoing development of our pupils’ environmental knowledge and awareness. We are grateful that modern technology has allowed our community to enjoy this exhibition, albeit remotely, and we look forward to seeing how much money we raise for WWF.”