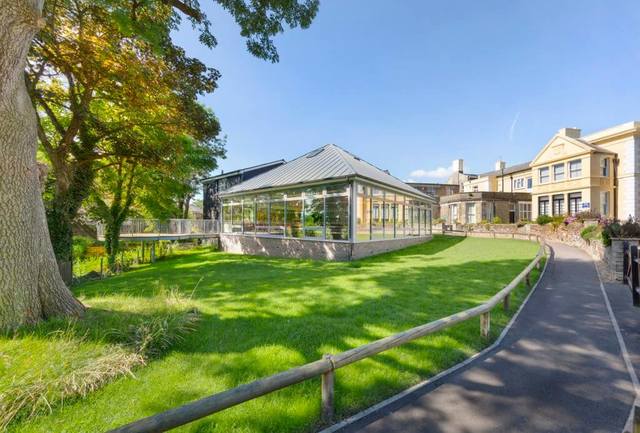 St. Aubyn’s School is a co-educational independent school for 530 children aged 3 to 13.

Situated in beautiful surroundings of Woodford Green and Epping Forest and easily accessible from the main thoroughfares of London, St. Aubyn’s is set in eight acres of grounds. It is self-contained and well-resourced, offering small classes and high levels of teaching.

The focus is on the education, welfare and personal development of each child. Strong relationships are at the core of this: relationships among pupils and between pupils and staff, all backed up by a partnership with parents.

A Christian foundation, the School is inclusive of all faiths and backgrounds. Children respect each other’s individuality and achievements. The school motto from 1884 still reflects the approach to teaching and to learning today: Fortiter, Fideliter, Feliciter; Bravely, Faithfully, Happily.

Our Open Morning will begin at 10.00 am and the Headmaster's Introduction will start at 10.15 am in the Performing Arts Centre. Full tours of the school will be conducted by pupils and staff.
Find out more

The Governors of St. Aubyn’s are committed to broadening access to the School by offering to eligible parents/guardians means-tested financial support with the payment of school fees. Such support is known as an Assisted Place or Bursary and this may be awarded to a pupil entering Year 3 (7+) in the form of a discount of up to 100% of tuition fees payable, depending on the financial, compassionate or other pertinent circumstances of applicants. Assisted Places are open to all candidates and are available, subject to annual review, through to Year 6, with the possibility of extending through to Year 8.

The Governing Body of the school has set the level of fees per term for the financial year from April 2021 and these are detailed below.

St. Aubyn’s School is a charity and the whole income of the school is used for the benefit of its pupils. In accordance with our terms and conditions, the Governors reserve the right to increase fees within the next financial year in the light of any unforeseen circumstances.

Over the last two years, St Aubyn’s has launched an appeal at Christmas time to support those who are less fortunate. The school collected non-perishable food and toiletries for a local foodbank.

30th November 2020 — This year, as the country contended with the ongoing pandemic and more and more people were turning to foodbanks to feed their families, the Senior School Council at St Aubyn's School spearheaded a whole school initiative to collect food for the local community.

They asked all pupils to bring in items of non-perishable food and toiletries to be donated to the Redbridge Foodbank, part of The Trussell Trust’s network of 428 foodbanks across the country.

Deputy Head of the Senior School, Mrs Slade, was very proud of the pupils’ efforts. “Inevitably, our pupils and parents rose to the challenge and donated a huge amount of items - so much so that we were actually asked to delay making our second donation trip, so that they had time to process all the items from the first! Thank you to everyone for their generosity, to the Senior School Council team who worked incredibly hard to load the minibus and to Mr Clarke for delivering the items to the foodbank.”

Jose Soares, Redbridge Foodbank, expressed his thanks to the School. “Thank you, St Aubyn’s, for the amazing donation yesterday - we are truly blessed to part of such a generous community.”

Service and sacrifice help us to make our communities safe, save lives and protect our freedom in times of crisis.

13th November 2020 — L Bom, Headmaster, writes: During assemblies this week, we celebrated Remembrance. It is 75 years since the end of WW2. Remembrance Sunday is a day to remember the sacrifices made by members of the armed forces and civilians in times of war. We are reminded of the importance of peace and the need to work together to keep it. During WW2, 400,000 British and Commonwealth forces died. We also celebrate the people who came back from the war, as well as those who worked so hard to rebuild our country afterwards.

In the assembly, I spoke of the idea of service and sacrifice—what this means during the time of war and what it means for us today. During the coronavirus pandemic, as in WW2, many people offered their services to help others and bring about relief. We think of the teachers looking after key workers’ children in lockdown, nurses, doctors, armed forces and the community volunteers who helped at food banks. Those serving are generally more at risk and exposed, even with PPE equipment. I am sure many of you have had direct experiences of these dangers via your family or friends. During the war, people offered their services and worked for the local community, often putting themselves in harm’s way. They had to leave loved ones behind to go and fight and defend freedom for everyone (volunteers, Armed Forces, Medical staff) fighting on the frontline with the risk of being killed (Armed Forces). Some sacrifices were more significant than others, but they all played a part in defeating the enemy and winning the war.

During COVID – 19, helpers such as foodbank volunteers and NHS volunteers, have faced danger to help others. They have put themselves in danger on behalf of their communities and their country. Our NHS workers have made huge sacrifices by leaving loved ones to live alone in special accommodation to protect their families from catching the virus. They put themselves in danger every day by working directly with people who have contracted the virus or through medical research and trying to find a vaccine.

During the last week of term, the efforts and achievements of Middle and Senior School pupils were celebrated at Prize Giving. Pupils received certificates, cups and trophies to mark the end of a successful, if very different, year at St Aubyn's.

16th July 2020 — No VIPs, no valedictory speeches, no proud parents, no celebration party afterwards; it was all very different this year when the pupils attended Prize Giving. Nevertheless, it was a wonderfully happy event as evidenced by the beaming smiles on the pupils' faces.

Mabel in Year 8, proudly sporting her Leavers' 2020 hoodie, had her hands full as she was awarded the Luke Wilson Cup for French and the Thomas Cup for Art. She was also presented with the Young Manager of the Year Shield.

Headmaster, Mr Blom, praised the resilience, perseverance and achievements of all the pupils and staff who had contributed to another successful year, both in and outside of the classroom.

"The results at 11+ and 13+ were outstanding and make us incredibly proud. This is a great achievement, recognising the hard work of the teaching staff, the support of the parents and, most importantly, the commitment of the children to ensure their own success."

The latest St Aubyn’s Eco Challenge was to design and create a useful and appealing item from recycled materials in the home.

18th June 2020 — Middle School winner, Dhevi described how she made her creation, “I took an old box for trainers, some cardboard tubes, a small Rice Krispies box (other cereal boxes may be used!) and some orange tissue paper to make my giraffe bookshelf. It’s quite delicate because it’s only held together with glue from a glue gun. The funniest thing about my bookshelf is that I can still keep my trainers in their box!”

Year 1 pupil, Juniper, enlisted help from her parents. “My dad cut off the bottom of our old Christmas tree and I went on a treasure hunt around the house with my mum to find some beads and other bits and pieces to make a sparkly front door number.”

Eco Committee teacher, Mrs Slade was thrilled with the results, “The children might not be in school at the moment, but their learning never stops! They never fail to amaze me with their clever ideas and enthusiasm for the very important message of Reduce, Reuse and Recycle!”

How hard can it bee?

How hard can it bee?

The Chelsea Flower Show may have been cancelled this year, but it didn’t stop the keen, green-fingered young horticulturalists at St Aubyn’s from getting creative in their gardens.

20th May 2020 — The Eco-Committee challenged them to take inspiration from Chelsea and come up with ideas to encourage more bees into their gardens. Their activities included making bee hotels and bee watering holes and introducing bee-friendly plants such as lavender and roses. They also planted fruits and vegetables.

Year 2 pupil, Bea, explained, “I made a bee hotel and a bee watering hole which I have put near the lavender. I didn’t have any glass beads so I used stones instead.”

Saanvi planted beanstalks in her vegetable plot. “I first grew the beans indoors in a plastic recycled zipbag and then, once planted outside, I watered them regularly with water that we had used to wash vegetables in the kitchen.”

Previous eco-tasks have challenged the pupils to come up with clever ideas for saving water and making bird feeders and many have taken part in the school’s wildlife photography competition.

Pupils Florence, James and Etta-Rose used collected rainwater from their water butts to water their plants and seeds.

Teacher, Mrs Slade, praised all the children for their ingenuity and obvious passion for the eco-committee’s activities and their gardening!

The Arctic comes to Essex!

The Arctic comes to Essex!

To round off a very busy half term, Year 2 pupils at St Aubyn’s put on a fantastic show entitled Eddie the Penguin Saves the World, by Niki Davies.

25th February 2020 — The show relayed a powerful message about ecological and environmental issues and the importance of taking care of the planet.

Head of Drama, Mrs McDowell explained, “Eddie the penguin discovers that the world he lives in is changing and that the ice is melting. He decides to take his family to find a new home at the North Pole, where he meets Peggy the polar bear and discovers that human beings are causing the ice to melt. Eddie goes on a mission to save the planet and let the world know how they can change things for the better.

Dressed as penguins, polar bears and an assortment of humans, the pupils delivered their lines, actions and songs with great confidence! They all had great fun collecting various decorative props from around the world.”

“It reminded me of Happy Feet!” said one delighted audience member. “The children were obviously having so much fun whilst tackling this very serious topic.”

The performance helped to reinforce the school’s theme for the week which was Consumerism and joyfully reminded the audience to attempt simple changes to save energy and to make extra effort to recycle more.

The main points of entry to the school are the EYFS (Nursery/Reception) and at ages 7+ (Year 3) and 11+ (Year 7), with entry at other ages dependent upon vacancies occurring.

Entry to Nursery is non-selective by date of registration, therefore registrations should be made as soon as possible as waiting lists are always in excess of the places available. All prospective parents are expected to visit the School either before or after registration. This does not include Open Day. Offers will not be made unless parents have visited the School and met the Head.

A small number of places are available in Reception every year. When a vacancy arises, registered applicants are invited to an informal age-appropriate assessment which is designed to identify applicants who will be able to benefit fully from the balanced and well-rounded curriculum.

Places are also available in Year 3 and Year 7.

Our Open Morning will begin at 10.00 am and the Headmaster's Introduction will start at 10.15 am in the Performing Arts Centre. Full tours of the school will be conducted by pupils and staff.
Find out more