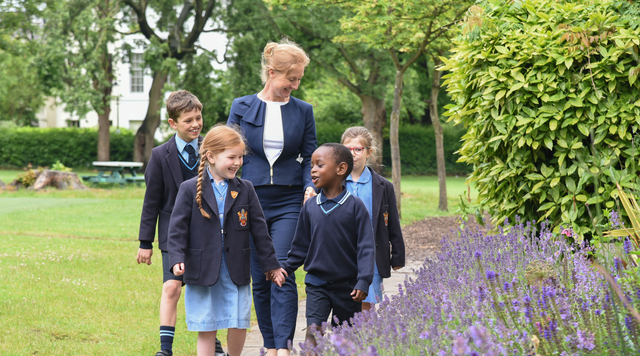 RGS Springfield is an IAPS school for boys and girls aged 2 to 11 set in the heart of the City of Worcester.  It is one of the Prep Schools for RGS Worcester.  It was graded 'excellent in all areas' in the ISI inspection of 2015.

RGS Springfield, has a wonderful family atmosphere and nurturing co-educational environment, which together creates a uniquely friendly school. Our aim is to ensure that children develop their full potential academically, socially and emotionally in a safe, caring environment. All our pupils, who range in age from 2-11 benefit from individual care, small class sizes, professional and dedicated teaching; all of which help children become confident, secure and considerate of the needs of others. The school has scored highly in recent inspections, rated as consistently outstanding by Ofsted, ECERS and ISI inspectors. There are a wealth of academic and extra curricular opportunities to provide children with an enriching and stimulating environment, preparing them for the challenges of the 21st century, underpinned by traditional family values. The school has wonderful grounds, which allow pupils to play outside in all weathers, learn from the natural environment and take part in all the fun that Forest School offers; wellies are very much encouraged! The school, tucked away within the beautiful Georgian Britannia Square in the heart of Worcester, will provide a safe and happy place for your child to grow and develop. This website conveys only some of the ethos and spirit of RGS Springfield. Please visit us and see for yourself the happy, smiling faces of children having fun and learning in a stimulating environment. We are very much a happy family. I look forward to welcoming you in person to our school.

We look forward to welcoming you to our Open days here at RGS Springfield.

The process is designed so as not to be daunting for candidates. Headmistress Laura Brown is closely involved in monitoring the progress of scholars as they move through the school. There is no need to apply for an Academic Scholarship, as all candidates who sit our entrance exam are considered. For any questions about scholarships please contact us

Our fees are inclusive of lunch, a mid-morning snack consisting of milk/water and fruit, before and after school wrap-around care and the majority of after school clubs.

FROM SEPTEMBER 2021 OUR FEES PER TERM ARE:

There is a 10% discount available for a third sibling, whilst all three children are at RGS Worcester, effective when the youngest child reaches Year One.

School fees are charged in advance and are du

RGS Springfield children will be fundraising for The Grace Kelly Childhood Cancer Trust, a charity that raises money and awareness for rare childhood cancers

Our pupils learnt about Grace’s story and what the charity does and what any money raised might be used for to inspire them to put love and energy into their fundraising. It is important that we find charities that they can learn from, connect with and feel the positive impact of their contribution.

Mrs Laura Brown Head Mistress at RGS Springfield says, “The children are planning lots of fundraising to support all their charities this year including cake sales, sponsored swims and a fun run.”

With a strong focus on environmental issues around the globe, the children were tasked with choosing a current environmental problem that they felt passionately about. They then had to choose a role, either that of an Educator, to educate visitors on the problem, or Inventor to invent something that would help alleviate the problem. The Science Fair competition was open to all children from Reception to Year Six and there were some fabulous entries! The competition was judged by Science teachers from RGS Worcester Senior School and they were impressed with the standard of entries and the children’s knowledge.

Each child received a medal for participating and the winner from each year group, received a science kit, to continue their science learning at home. It was lovely to see the children so enthused about their subject and the School hall brimming with parents and visitors, all excited to view the projects!

Headmistress, Laura Brown said: “I am so proud of the hard work and enthusiasm shown by all the children who entered. They were knowledgeable and enthusiastic about their projects, showing great team work and creative flair, as well as real understanding of some of the environmental issues faced by the world today.”

RGS Springfield, one of three schools in the RGS Worcester family, was this week invited to sing at HSBC in Worcester at a special event for their premier banking customers.

8th December 2016 — The children from RGS Springfield arrived at the bank mid-morning and met customers in a private lounge. Under the able direction of their music teacher, Mrs McCabe the children sang their way through a suitable festive repertoire with many positive comments passed on by the audience.

Mrs Laura Brown, Headmistress of RGS Springfield said, "It was a great opportunity to sing in front of a small audience and meet with the branch staff. The children sang very well and I am very pleased with their great performance."

At the beginning of this term, the Brownie pack from RGS Springfield decided to gain their Writer's Badge.  One of the tasks they had to complete was to write a letter, so they decided to write to Blue Peter.

14th March 2016 — At the beginning of this term, the Brownie pack from RGS Springfield decided to gain their Writer's Badge.  One of the tasks they had to complete was to write a letter, so they decided to write to Blue Peter.

They all wrote about their visit to watch 'The Lion, the Witch and the Wardrobe' at Birmingham Repertory Theatre and Brown Owl then sent the letters to Blue Peter to see if they would be awarded a Blue Peter Badge. A special envelope for each Brownie arrived and inside was a Blue Peter Badge.

RGS Springfield take on the Government

RGS Springfield take on the Government

Year Six at RGS Springfield travelled to London to as part of their project focusing on democracy, government and how laws are made. Children have been looking at how the country is governed through the Monarch, Prime Minister, House of Lords and House of Commons.

The children visited the Houses of Parliament and met Robin Walker MP for Worcester, who spoke to them about the debate on healthcare that was going on at the time and the work he does in his job. He also answered questions about about being a Member of Parliament.

Mrs Angela Webster, Year Six teacher said, “The tour of the Houses of Parliament highlights the elements of government and helps the children to understand how people become either an MP or a Peer. Seeing the Speaker's procession with the mace which represents the Monarch in the Commons and the gold throne in the House of Lords really brought our learning to life.”

Finally the children took part in a workshop run by the Education Unit at The Houses of Parliament where the pupils took part in a quiz, elected a Prime Minister and Speaker and conducted their own debate on the death sentence. They also had the opportunity to experience, through role-play, the process of a bill becoming law.

rs Webster concludes, “The children loved this workshop and several said they would be really keen to join the debating club as they hadn't realised how interesting politics and debate could be. Harry said that the trip was thrilling and has made him far more interested in debating and current affairs and Sian would like to be Prime Minister!”

The children at RGS Springfield welcomed a very special guest to be part of their Christmas Nativity celebrations.

If you would like to consider a place at RGS Springfield for your child, we recommend a visit as the starting point.

We would be delighted to give you a personal tour of the school or meet you at one of our Open Days. If following the visit you think your child would enjoy the learning environment that we have created, you can formally apply for a place by returning the completed Registration Form with the £45.00 fee. If applicable, we will then request a reference from the current school and, on receipt of this, we will invite you to bring your child into school for a taster day to join their class for the day and enjoy lessons and making new friends.

Children coming into Reception and Year One will be informally assessed by their class teacher to gauge their working levels. Places will be offered fol

We look forward to welcoming you to our Open days here at RGS Springfield.