Finton House is a co-educational inclusive prep school in Wandsworth for children between 4-11 years old, with a strong family ethos. The School was founded in 1987 with two founding principles: a non-selective intake and a fully inclusive education.

The school motto ‘Open Hearts and Guiding Hands’ sums up the warm and caring relationships that we aim to promote in order to deliver an outstanding education.

Finton House was founded in 1987 as a charitable trust with two principles in mind. Firstly that young children should not have to face the pressures of a competitive entry system. Secondly that of providing an inclusive environment, where all children, including those with specific needs, have the same opportunities. These principles underpin the educational experience at Finton House. 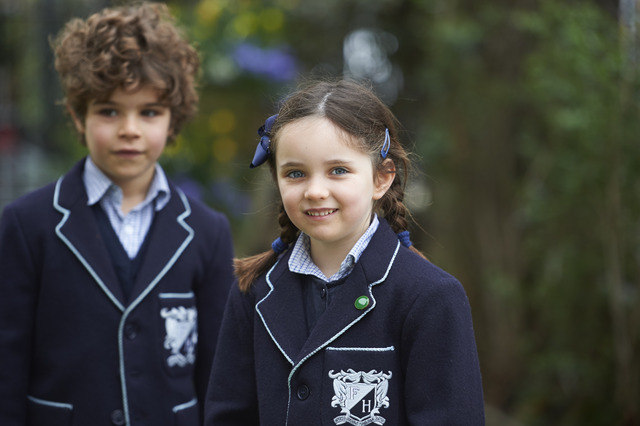 A bursary can pay for up to 100% of the fees for a pupil whose family is unable to meet the cost of independent school. The bursary fund was launched in 2007 in memory of Sally Walker, Deputy Head and Head of Special Needs at the school from 1999-2002 and Headmistress from 2002-2005. Bursaries are available to children aged 7 or over on the 1st September of the year of entry (Year 3).

Finton House School is one of the first schools in the UK to use a Food Digester to break down biodegradable kitchen waste.

Mr Ben explained that there are a number of initiatives including new recycling bins in all classrooms, which help the children to easily separate recycling from the non-recycling. Our research revealed that the Earth will run out of trees in 300 years! Finton is doing as much as possible to prevent this. So far, we have saved 140 trees by using the food digester, which is enough to make 17 million pieces of paper. If you stacked up all the paper, it would be as tall as two Empire State buildings on top of each other. We have also saved enough carbon to power a car for a whole year, according to Mr Guy. Mr Alan pointed out that the Food Digester improves the way we recycle because it means we don’t have as many general waste black bin bags which go to landfill.

But this is only the beginning. Finton House staff and children are thinking about more ways of saving the planet. Did you know that by 2050, there will be more plastic in the sea than fish? We asked Mr Guy what he would make out of our plastic waste, and he thought of a structure in the playground where we can shelter from the rain, or a tunnel leading from the main building to the specialist classrooms. Mr Ben suggested that we could be even more environmentally friendly by buying food produce without plastic and checking where the products have come from in order to source the food locally from farmers nearby.

The school has exciting plans for future initiatives and has also recently been awarded the silver accreditation of TfL’s STARS scheme with an aim to help reduce congestion and pollution by encouraging more families to walk, scoot or cycle to school. Inspiring pupils to think and act sustainably is a key focus at Finton House which we all feel strongly about.

Gold for Finton House at the IAPS Swimming Finals 2018

Gold for Finton House at the IAPS Swimming Finals 2018

On Saturday 9th June, six Finton House swimmers participated in the IAPS National Swimming Finals 2018 where the U10 freestyle relay team wowed the audience with an excellent performance winning gold.

15th June 2018 — From over 5,000 children who had tried to qualify for the IAPS Swimming Finals, Finton House School was represented by a team of one Year 6 and five Year 5 children who all swam incredibly well on the day. With over 3000 spectators at the Aquatic Centre, the excitement and atmosphere was infectious as the swimmers got prepared for their races. Issy (Year 6), India and Emily (Year 5) made it through to the individual races’ finals where India produced an amazing swim with a new school record of 17.25. The crowd cheered excitedly when it was announced that India won the silver medal. What an achievement!

In the freestyle relay the team comprising of Hannah, India, Emily and Sophia stormed into the lead going into the last leg and incredibly Sophia managed to hang on a couple of hundredths of seconds which meant gold for Finton House School!

Mr Anthony, Head of PE at Finton House School, commented: "What a fantastic achievement by the girls, who should be really proud of themselves. They have worked extremely hard to win the gold medal at the IAPS!"

An Extraterrestrial Appearance at Finton House

An Extraterrestrial Appearance at Finton House

The children arrived at school in the morning to discover a crashed spaceship in the playground which had appeared overnight - all part of a challenging space mission on their STEM Day.

10th May 2018 — Finton House School were tasked with a challenging space mission on their STEM Day recently. The children arrived at school in the morning to discover a crashed spaceship in the playground which had appeared overnight. This rapidly fuelled some early morning speculation as to what may have happened.

The children were then quickly ushered into assembly where a newsflash told them that an alien had apparently crash-landed at Finton House. A few CCTV clips showed the alien in various parts of the school, including sitting at the Headmaster’s desk. As the assembly continued there was sudden uproar as the alien walked past the window behind the presenter. Clearly something had to be done.

Throughout the day, children completed various problem-solving activities (relating to Science, Technology, Engineering and Mathematics) to return the alien to its home planet. Our young engineers in Year 1 helped the alien by designing their own rockets and making straw rockets with fins to give them stability. Working in teams, Years 5 and 6 used Spheros (controlled by the iPad) to calculate and programme a route through a giant map of the universe back to the alien’s home.

Everyone visited the giant Science Dome, which was like a planetarium, to see footage of the space station, enjoy a journey to each planet and even a rollercoaster ride through the rocks and ice of Saturn's rings. “It was totally awesome” reported one Year 3 pupil.

Another highlight of the day was the self-built rockets launching in the playground. To the amusement of the children, one of the rockets was so well built that it landed on the School’s roof.

At one point in the afternoon, a UFO was spotted in the sky: "Perhaps that's the alien's friend coming to rescue him", cried the children in Year 1.

It was a very memorable day filled with valuable hands-on learning experiences, engaging the whole school and every member of staff!

Ben Freeman, Headmaster of Finton House, said: ‘There’s nothing like this kind of immersive learning to trigger massive enthusiasm for a whole range of subjects. It takes a great deal of planning and resource, but the dividends are incalculable.’

Finton House wins the South of the River Swimming Gala

Finton House wins the South of the River Swimming Gala

Girls from 11 schools located south of the river competed against each other in the exciting annual swimming gala hosted by JAPS. The Finton House swimming team showed an incredible performance on the day winning medals in 17 out of 19 races.

15th March 2018 — Girls from 11 schools located south of the river competed against each other in the exciting annual swimming gala hosted by JAPS. 13 individual races and 6 team races made for a balanced swimming gala with tough competition lined up on the day.

The Finton House swimming team showed an incredible performance on the day winning medals in 17 out of 19 races and therefore taking home the title of the ‘Best Girls’ Swimming Team South Of The River 2018’.

Mr Anthony, Head of PE said: “The children are always well supported by a travelling army of wonderful parental support, which really helps the girls produce their best. It was a fantastic achievement and we are very proud of the girls.”

The atmosphere at the event was fantastic and showed the enthusiasm of the young swimmers and their supporting families and friends.

Children from Finton House joined those from Oak Lodge School and Sellincourt Primary School, in raising their voices (and funds) for sign2sing this week.

5th February 2018 — Children from Finton House joined those from Oak Lodge School and Sellincourt Primary School, in raising their voices (and funds) for sign2sing this week. The children all learned the song “Friends Forever” in Sign Language and performed it at Trinity Road Chapel to an excited audience which included Sign2Sing Chief Executive James Watson-O’Neill and members of the Sign2Sing fundraising team.

Sign2sing is in its 8th year, helping fund projects that improve the lives of vulnerable deaf children and adults by helping them access help and advice on the things that matter to them in Sign Language. Imagine living in a world where you cannot communicate with the people around you, from your doctor to someone in a shop. That’s what the world is like for many deaf people. Deaf people can often feel isolated, unable to access information and advice that can help them live happy and healthy lives. Something hearing people take for granted.

James Watson-O’Neill spoke to us after the event: “This is a great event, joining over 500 schools across the country to promote the use of sign language. Our current focus is on bringing signing into health services for young people, but really this is about the removal of barriers to deaf people across all ages.”

“Friends Forever” is being performed in schools all over the country as part of “sign2sing week” Feb 5th- 11th 2018. Is your child’s school taking part?

29th January 2018 — Guided by local indigenous guides, Year 3 pupils at Finton House School were transported in seconds to Australia in an exciting Virtual Reality Workshop. Not only was the workshop a lot of fun, but the children also learnt interesting facts about Dreamtime stories, Aboriginal dances and Australian scenery in a full 360 degrees view. One child commented that it felt like she was actually in Australia experiencing everything for herself.

The workshop leader encouraged interesting discussions about the aboriginal life pre-1788, which expanded the children’s knowledge even further and deepened their learning through incorporating historical facts in 3D experiences.

The workshop definitely also made a few of the staff interested who dropped in to have a go themselves! Miss Bridget, Deputy Head at Finton, commented: "While it was a cold and wet morning here in London, our children were transported to hot Australia in seconds which was an exciting experience for them all!"

Finton House has a policy of non-selective entry and places are offered on a first come, first served basis, with no interview or assessment. Parents are advised to register for Reception places as soon as possible after the birth of their child. Up to 60 places are offered each year, half to girls and half to boys.

Late Entry places are sometimes available for children over the age of five, and parents are encouraged to contact the Registrar if they are looking for a place in Years 1-5.